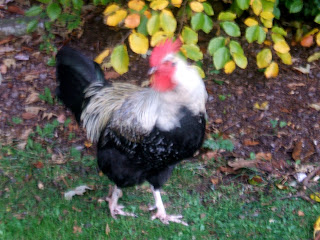 Last Friday a motley group of adults met together at a south western venue for a fun weekend away from our usual mundane lives. We ranged in age from around mid thirties to early sixties, and we came from all over the country, the Midlands, the North, the South, the Capital and the South West, and from all walks of life, and professions, plus an OAP! Within a couple of hours of arrival, once everything had been unpacked and put away, we separated into two distinct groups. Uniformed pupils, and the Beaks (as our teachers are known collectively), and long before Lights Out the two sets, Children and Adults, had melded into their roles.
Our one disappointment was that Mr Malcolm was too poorly to be let out of the Home for the Confused and Befuddled. Matron put her foot down and decreed that he remain in his sick bed, (while, no doubt, she stroked his fevered brow) instead of coming along to join his colleagues. He's been at New Grange Manor since he entered the teaching profession as a student teacher, and it was generally agreed that he has shaped up very nicely as a Beak, and of course his loyalty and helpfulness are second to none. However, I digress.
We were left more or less to our devices while Miss Livingstone sorted out the evening meal. It appears that the chef had had an unfortunate accident with a horse..... Our groan ups don't seem to have much luck with animals, Mr Holmes was chased by a flock of feral hens and according to Miss Livingston was found half way up a tree, cowering on a branch. Unfortunately no-one has told him that hens don't really fly, so he was farther up the (gum) tree than he really needed to be! You can see a picture of his chief persecutor above! Tommy decided to hide the school bell. I helped her by suggesting an interesting hiding place. Chris got thrashed by Miss Livingstone because the bell was missing, despite Tommy confessing that he had taken it, and that I was involved on the periphery of the prank! We got our comeuppance too!
Sarah, Michelle and I were thrilled to discover we were sharing the same dormitory as last year, with Tommy Mac two doors away, and Chris Pike in the the far dorm beyond Tommy. Keith was behind us in San, cos he was still recovering from a rather nasty cold and cough which left him with a very poorly chest, poor lad. We were less than thrilled to find that Miss Livingstone had given Mr Melman (Postie Pat) the room in between us and Tommy, so that we could be more closely supervised after our mischief making last year. We had a feeling we were going to have to work extra hard in order to complete our plans this time, and so it proved!
Still, we arrived before Postie did, so Shell and I proceeded to booby trap his room while we had the chance. A noisy plastic chicken went under his pillow (on hindsight it might have been better suited to Sherbert Holmes' bed), several mice, giraffes and spiders went under the duvet, and a fart machine was cunningly concealed behind a bedside cabinet.
We set the table for dinner (all the pupils had chores and we were all very good about getting them done). We had one long refectory table, the pupils sat at the head, and the teachers at the foot of the table. All the old hands amongst the pupils chose their seats with care, thereby leaving the newer pupils, Keith and Chris, sitting next to a beak. Keith was okay cos he had Prof Robertson on his right, but Chris was sitting to the left of Postie. This resulted in most of the meals being punctuated by the cry, "Pike you stupid boy" and the crack of Mr Melman's hand against the back of Chris's head!
We had scrummy shepherd's pie, with seconds for the hungriest (Chris and Postie!) and a pudding too. As it was the first night and we'd all had long journeys, Miss Livingstone did a quick Assembly, running over the rules, Bounds, Lights Out Rules etc, then we were sent to wash, get into our pyjamas and snuggle into bed before Lights Out. So away we went. And I will leave it there for now, dear Reader, because the activities after lights Out deserve a chapter to themselves!
Bethany
Posted by Bethany Grant at 02:39