In the School Grounds. 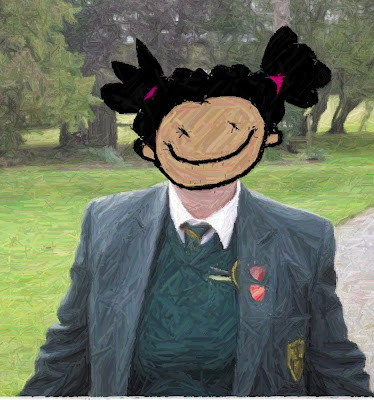 The school grounds were stunning. So spacious, and the air was beautifully clear, other than if one was down wind of Prof Robertson's pipe!
It was a glorious venue.
Bethany
Posted by Bethany Grant at 15:07 2 comments:

First of all, I'd like to point out that this blog about Boarding School is a joint effort between Michelle and myself. We have pooled notes and memories in order to protect the innocent!

For prep at Boarding School, we were given an essay to write called "The Vanishing Headmistress". This was my contribution.

Posted by Bethany Grant at 06:04 No comments:

Just home from boarding school, and it was even better than last time. Didn't think that was really possible, but it was! We had such fun! We had lots of interesting lessons, and we were so full of mischief that the Staff Room reverberated night and day to our cries of woe once we had been caught, which we invariably were.
Anyway, first of all I need a hot drink and a chance to quieten down from my excitement, then I will share all (well nearly all ) with my readers.
Bethany Grant
Head Girl
Posted by Bethany Grant at 09:07 No comments:

It will be boarding school soon. We have got so much mischief planned!! My guardian is busy washing and ironing my uniform, including my PE kit all ready to pack in my suitcase. I have one or two things to go in there too!
I'd love to share with you all just what we are going to get up to, but as I've said before, the odd Beak occasionally casts an eye over this, so you will have to wait until term is over, and I can reveal all!
Bethany
Posted by Bethany Grant at 05:41 1 comment: