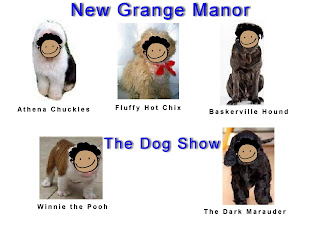 We did it! We had a Dog Show, after Lunch!! I took six photos of dogs, and superimposed a Beak's face over each of their faces, and then we gave them all kennel names, just like at Crufts. So we had:-
Miss Livingstone - Old English Sheepdog - Athena Chuckles
Mr Melman - Cocker Spaniel - The Dark Marauder
Mr Malcolm - Poodle - Fluffy Hot Chix
Mr Holmes - Mastiff - Baskerville Hound
Prof Robertson - British Bulldog - Winnie the Pooh

Matron was a rather stunning Afghan Hound, kennel name Florence of Arabia, but as she was sadly absent she was scratched from the entries.

We had four classes, Dog with the Waggiest Tail, Dog with the Cutest Expression, Dog in Best Condition and Dog the Judge would like to take Home, with four rosettes per class, Best in Show and Reserve Best in Show.

The full Results were as follows:-

Dog with the Waggiest Tail

Dog with the Cutest Expression

So it was all good fun. The Beaks got a little rosette as a memento of their (unwitting) appearance in the Dog Show, the pupils were kept busy after lunch and out of mischief, and we all had a giggle. Nice naughtiness you see, that's the sort NGM prefers.

So now, dear readers, no doubt you will want to see the entrants? I'm uploading a photo, but for discretionary purposes, I have blanked out the original Beak's faces, but you should still get a flavour of what we did!
Bethany Grant
Head Girl